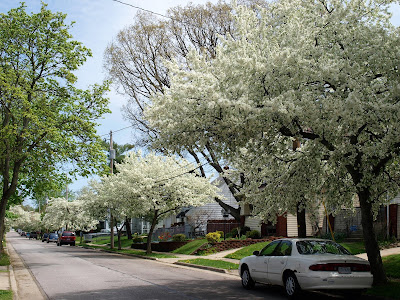 White-blossomed trees
line the street
appearing overnight
like a dream.

They look as if
they've been festooned
with cotton lace, popcorn,
or maybe...whipped cream.

Branches make canopies over the walk:
fragrant, delicate, and sweet.
A slight breeze stirs up a few white petals
that float down like wishes,
drifting across the path at our feet. 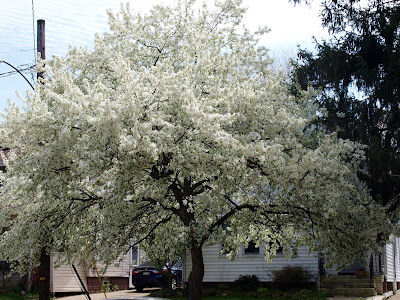 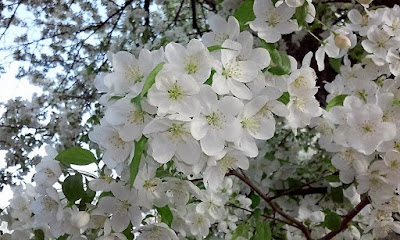 On the Defensive, That's Just Silly, and Last Cookie

I'm continuing with poems written from prompts. The prompts for today's post were: write a "defensive" poem,  write a "silly" poem, and write a poem with the title "Last ____ (fill in the blank)." Truth be told, I think all three of these poems ended up fitting into the "silly" category, but here goes.

You can’t blame me, Ms. Mosquito.
You gave me no other choice.
You, with your dive-bombing needle nose,
and your annoying, whiny voice.

You attacked and put me on the defensive.
I’ll tolerate no more bites from you.
You’re an itchy nuisance.
SMACK!
Farewell, Ms. Mosquito. I bid you, adieu!

Have you ever seen a giraffe wearing a scarf?
Imagine how long that scarf would be.
Have you ever heard a toad play a saxophone?
Now that would be something to see!
What if pigs carried parasols
to protect them from the sun?
What if cows could dance a jig?
Wouldn’t that be fun?
Chase those cobwebs out of your brain.
Let your imagination run free.
Don’t be afraid that someone will complain,
“Oh!  That’s just silly!”

You took the last cookie?
How could you? I was saving that for me!
I was going to enjoy it
with a nice cup of tea.
Oh well, never mind.
You won’t hear drama from me.
I won’t make a fuss.
I won’t whine and cuss.
I’ll just have an apple instead.
No chocolate chips, no crunchy nuts,
just healthy fruit...
grumble, grumble, mutter, mutter, munch.
Posted by Connie at 4/27/2016 12 comments:

Hideout, Optimism Is, Rage Is

I'm posting more poems written for prompts today. The prompts this time were to write a poem about a hideout, and to write a poem with an emotion as the title. I wrote two different poems for the second prompt because I thought it was an interesting challenge.

When I was little, I would hide
in the bottom of my bedroom closet
beneath the hanging clothes,
amidst the bags and shoes on the floor.

When I was a little older,
I’d climb up and hide in the branches
of the old maple tree
that grew outside our back door.

Now my favorite hideout
is being at home, cup of tea and book in hand,
with the phone turned off, and the doors locked.
Who could ask for more?

Sunshine peeking through the storm clouds.
Flowers thriving in the presence of weeds.
Continuing to garden in spite of drought.
Watching the weather and planting seeds.

Below are two more poems that I wrote based on the prompts from the poem-a-day challenge. The prompts this time were "Urban ____ (fill in the blank)" and "Doodle."

The first poem I wrote is quite dark and depressing and unlike the type of poem I usually write. The second one is just sort of silly. It's been fun trying these prompts and stepping outside of the type of poems I usually write. It doesn't hurt to try something new once in a while and stretch the writing muscles. I hope you don't mind that I am sharing these experiments with you.

Spray paint graffiti, obscenities screaming,
masquerading as art, takes the place of dreaming.
Drunk or high, a man is weaving, stumbling
down concrete sidewalks, cracked and crumbling.
Boarded-up windows keep out the light.
Shady characters, wheeling and dealing, creep about at night.
Beer bottles shatter on the sidewalk when tossed from cars
by after-hours drinkers, kicked out of bars.
Overgrown weeds crowd vacant lots.
Nothing good flourishes here. Everything rots.

I’m taking notes during the meeting,
or so it would seem from afar,
but really I’m sketching, drawing, doodling
flowers, curlicues, and a random star.
The speaker drones on and on
about nothing of interest to me.
My pen continues to dance on the paper
creating kittens, birds, bullfrogs, and a bee.
So bored. So bored. Oh mercy me.
Will this ever end? Will they ever set us free?
Doodle dee doodle dee doodle dee dee.

The next two poem prompts for the poem-a-day challenge were to write a poem about the word  "experience" and to write a poem inspired by art. The "experience" poem I wrote has a rather negative tone to it, so to balance things and end on a more positive note, I tried to make the poem based on art more uplifting. Also, I tweaked the second prompt a little by writing about a photograph instead of a work of art (poetic license gives me the right, you know--Ha ha!).

Experience is a strict teacher
who gives hard homework
and focuses on difficult lessons.
The lessons can only be understood
with the investment of time, energy, and money.

Once your resources are exhausted,
your innocence is gone,
and your dreams are spent,
you realize too late
that you should have done things differently.

Experience leaves with you the rueful thought,
“If only I had…”
along with the dubious distinction,
of course,
of being older and wiser. 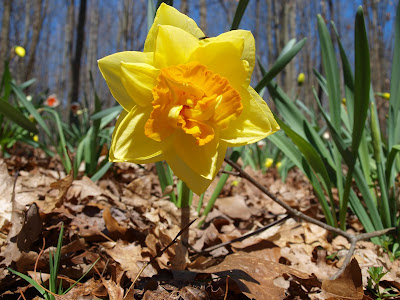 A triumphant daffodil,
bright pinwheel of sun,
held high on a green stem,
celebrates its emancipation
from the dirt and dry, brown leaves
of the forest floor
by softly fluttering
in the gentle breeze.

My husband and I took a walk on the Daffodil Trail in the Furnace Run Metro Park here in Summit County where I live over this past weekend. The weather was perfect, and we really enjoyed the chance to get out along the trail. Unfortunately, the snow we had the previous weekend was very hard on the daffodils, and many were damaged by the cold. Some survived, though, and I took a few photos including the one above.

Below are a few more photos from our walk including one of my husband and walking companion. The trail winds through the trees with different varieties of daffodils planted in bunches along the way. A deep ravine with water running through it is on one side of the trail for a while. In other spots little creeks of water trickle through and around the trees and sometimes cross over the path. Someone (not us) had carved hieroglyphics into one of the trees. I also found a few yellow Forsythia blooms at the end of the trail. We heard birds singing in the trees and a woodpecker hammering on one at one point. We also saw a few chipmunks along the way. You can click on the photos to enlarge them if you want to take a closer look at any of them. 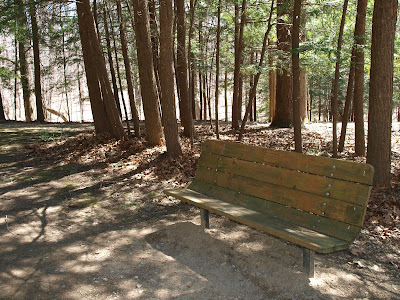 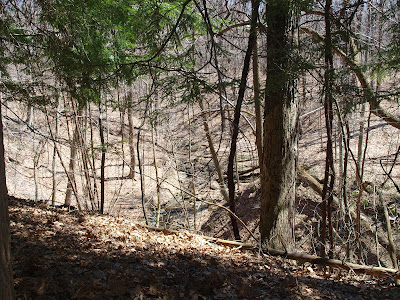 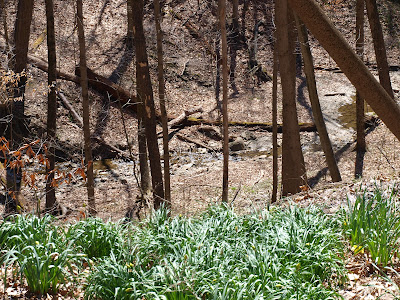 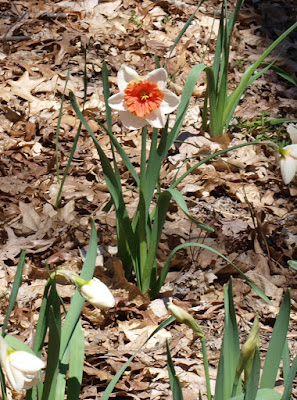 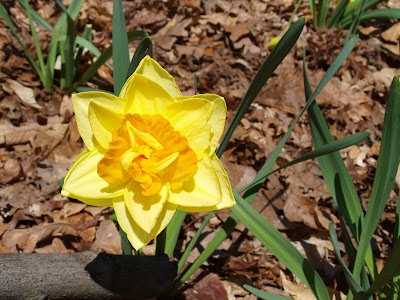 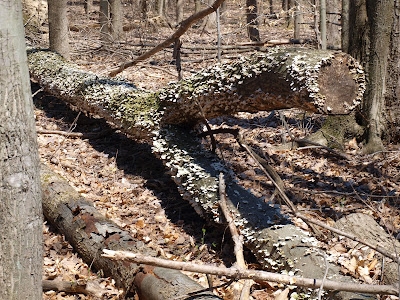 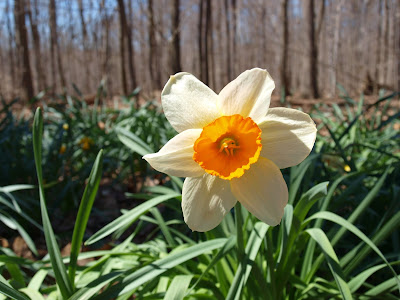 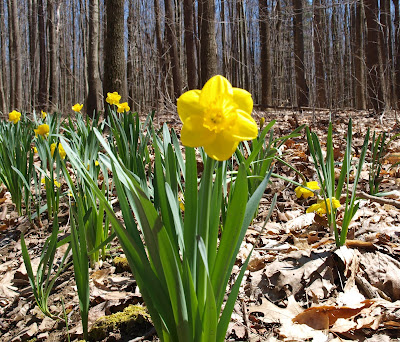 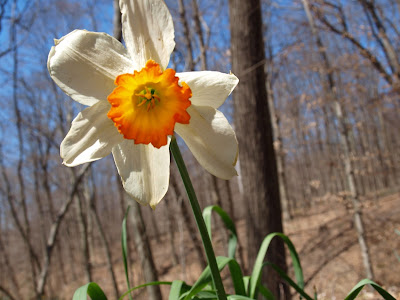 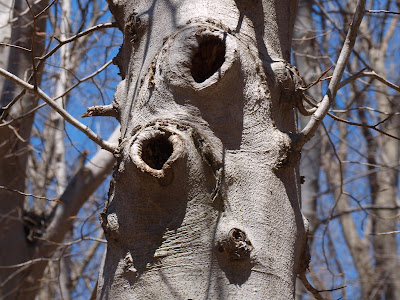 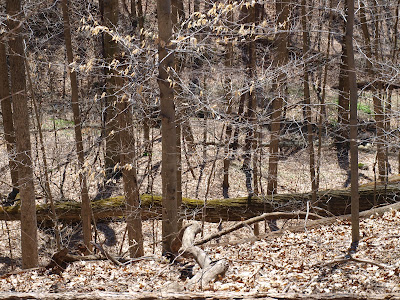 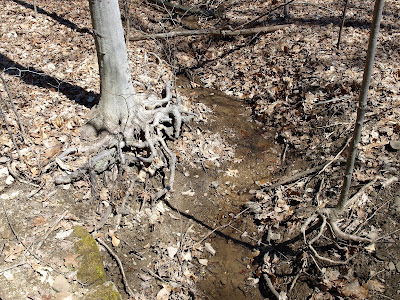 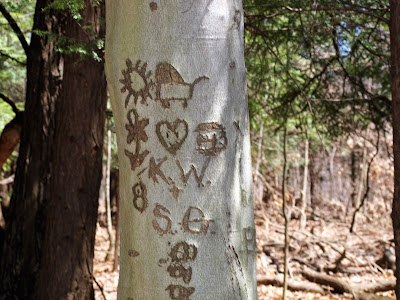 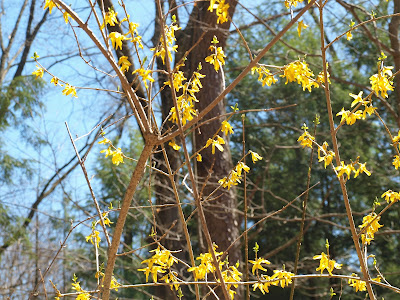 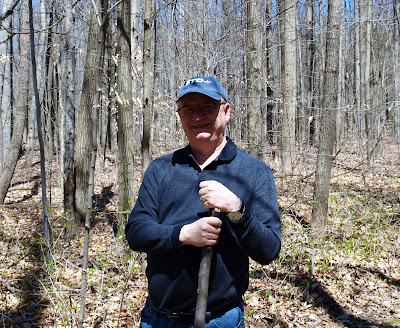 This is another poem based on a prompt from the poem-a-day challenge as mentioned in my last post. This poem was written from the prompt, "Distance."

He felt it as soon as he came into the room.
It was thick and heavy in the air.
She kept silent as he entered.
Pretending it didn’t matter.
Pretending she didn’t care.
She turned away from him.
She kept her focus on her book.
Her indignant silence shut him out.
She refused him the courtesy of even a look.
“I’m sorry, my dear. I wasn’t thinking,” he mumbled
as he crossed the room to her side.
Slowly she met his gaze.
She was relieved by his apology,
and with one kiss amends were made,
ending their great divide.

He Said She Said and Three Tries

Robert Lee Brewer is hosting a poem a day challenge on his blog during the month of April that I've been following. Each day he posts a prompt for participants to use to write a poem. I may or may not write a poem for each of his prompts. My last post on this blog was for his first prompt. Today's poems are for his second and third prompts. Obviously, I am not keeping up with the challenge, but it is fun to play around with the prompts. If I write any more poems to go with his prompts, I will post them here even if I am way behind according to the dates. The prompt for the first day was "Fool." The prompts for the two poems below were "He said she said" and "Three _____" (fill in the blank).

He Said She Said

He said he’d love her forever,
but when he said it,
he didn’t know how long
forever would take.

She said she’d honor and cherish him
before she realized
how big of a mess
he could make.

He said, “I think we can do this.”
She said, “I know we can.”
They made it through the mess to forever
with a lot of he saids and she saids,
and a lot of knowing
when to give and when to take.

They say the third time is the charm.
Now, I don’t wish to cause alarm,
but sometimes it takes only two
attempts to do what you must do,
and you also must be ready to do more,
because sometimes, sometimes, it takes four.
Or it could take just one… Imagine that!
You could be done in seconds flat!
Sadly, it could take many, many tries
to get a result that satisfies,
but practice makes perfect. So take heart,
and remember you’ll NEVER finish… unless you start.

I’m just a fool
who likes to spend her time
experimenting
with rhythm and rhyme.
I’ll never get rich
in this word game.
I won’t find fortune.
I won’t find fame,
but I have found
a kindred soul or two,
not a lot, just a few,
who also like
to put words in a string,
creating pearls of wisdom,
making lingual bling.